In Western culture, it is common for a wedding cake to be featured at the reception. A wedding cake exists as a centrepiece at the ‘wedding reception’ and is generally associated with weddings or marriage. The tradition of serving a wedding cake stems from ancient Roman times when a multi-layered cake was served as a symbol of unity and prosperity. 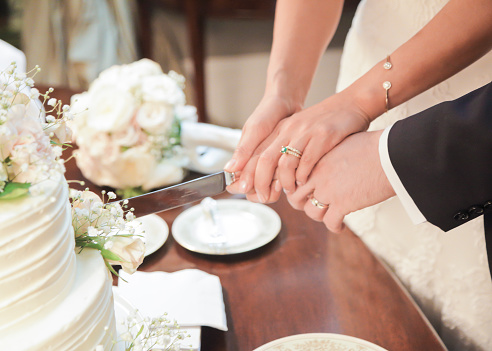 Nowadays, this association has been extended into modern-day traditions that have evolved from cultural interactions among various societies across history.

It is fitting to serve food that reflects the heritage of an individual’s family during their celebration, but what happens when there are multiple cultures represented in one ceremony? In certain situations, such as intercultural marriages where two individuals come from different backgrounds, it would be contradictory to serve a cake that symbolizes only one of the cultures.

In these cases, what is served as a wedding cake tells a story about the value placed on each culture, and often reflects the couple’s personality or values.

The cake is the traditional dessert served at a wedding reception, and it is typically given as a gift to the bridal couple. It has symbolic meanings that vary by culture, but one of the most prevalent associations with cake in weddings is that of consummation.

Most cakes baked for weddings are adorned with white frosting, although any colour can be used to match or complement wedding-related decorations or design themes. The top layer of the cake may also include another colour to represent another meaning related to the wedding.

The traditional meanings associated with cake at weddings include, but are not limited to:

– Good wishes for the couple’s consummation of marriage (i.e., reproduction)

– Breaking away from tradition (ideally without upsetting anyone); injecting some novelty into an otherwise familiar event (similar to breaking the glass).

– Representing that all guests involved in the event are now members of the wedding.

– Representing fertility and future children (the ever-increasing number of layers).

– Congruency between taste and texture/appearance (ideally, the cake should be enjoyable to eat as well as aesthetically pleasing).

The following are additional symbolism associated with cake in weddings:

– Slicing/breaking the cake signifies breakage of family ties, division of families, or other emotional strife. Alternatively, it can convey breaking away from tradition or starting something new.

– The couple’s first piece of cake is distinctly theirs.

– If a small piece of the cake was saved as a memento, it can convey hope for permanence and durability as well as good wishes for the couple’s future children.

In many cultures, including those of China and India, one way to express both congratulations and sadness at a wedding is by saying that the bride/groom will have sweetness in their lives but bitterness as well (i.e., because marital life comes with its share of challenges). This expression approximates the English phrase “something sweet and something bitter.”

In East Asian cultures (e.g., China, Japan), the number of candles on a wedding cake typically corresponds with the age of the bride/groom. This is because, at Chinese and other East Asian weddings, it is customary for children to be present; to keep track of how old each child is, this custom helps one easily recall their respective ages by tracking the number of candles that corresponded to each year since they were born.

In American and European cultures, a piece of cake may be saved after the wedding as a memento to help secure that the bride and groom will have a sweet life together. In addition, guests can feed each other from the same slice of cake, which is meant to symbolize feeding each other in times of need or want (i.e., they are now family).

It can also signify that all those involved in the event are members of the wedding/family. / breaking off pieces of this symbolizes sharing the burdens of married life.

The number of tiers on a wedding cake corresponds to the number of people in attendance at the wedding, discarding any extras. This custom likely stems from the time when cakes were much less sweet than they are today, so guests needed to have multiple servings to satisfy their appetites.

So those were some of the symbols of cake in weddings in western and eastern culture.